There are 3 double-digit numbers that, while they are rooted in the single-digit numbers, require special emphasis and attention.  These are 11, 22, and 33.

They are called Master numbers because they possess more potential than other numbers.  They are highly charged, difficult to handle, and require time, maturity, and great effort to integrate into one's personality.

The 11 is the most intuitive of all numbers.  It represents illumination; a channel to the subconscious; insight without rational thought; and sensitivity, nervous energy, shyness, and impracticality.  It is a dreamer.  The 11 has all the aspects of the 2, enhanced and charged with charisma, leadership, and inspiration.

Individuals with the Life Path number 11 are very intuitive, in fact it is the most intuitive of all numbers. They are sensitive and have a great understanding of others, and can sense a great deal about what is going on behind the scenes. For example, they will pick up on people's relationships and health without being told anything. They are here to use their gifts of intuition, and sensitivity to help others.

It is a number with inborn duality, which creates dynamism, inner conflict, and other catalyses with its mere presence.  It is a number that, when not focused on some goal beyond itself, can be turned inward to create fears and phobias.  The 11 walks the edge between greatness and self-destruction.  Its potential for growth, stability, and personal power lies in its acceptance of intuitive understanding, and of spiritual truths.  For the 11, such peace is not found so much in logic, but in faith.  It is the psychic's number.  11 also represents spiraling twin strands of human DNA moving into higher frequency of consciousness.

An unhappy 11 will find themselves always dreaming of big schemes, but never taking practical action to pursue those goals. This means the 11 is stuck in the "visionary" stage of enlightenment, and probably needs to address fear issues.

An 11/2 can be your own worst enemy. You're driven to perfection, but sometimes that just means you're on a carousel that won't stop. Learn to call it a day and don't get caught in self-blame.

The 22 is the most powerful of all numbers.  It is often called the Master Builder.  The 22 can turn the most ambitious of dreams into reality.  It is potentially the most successful of all numbers.  It has many of the inspirational insights of the 11, combined with the practicality and methodical nature of the 4.  It is unlimited, yet disciplined.  It sees the archetype, and brings it down to earth in some material form.  It has big ideas, great plans, idealism, leadership, and enormous self-confidence.  If not practical, the 22s waste their potential.  Like the 11, the 22 can easily shrink from its own ambition, causing difficult interior pressures.  Both the 11 and the 22 experience the pressure-cooker effect very strongly, particularly at an early age.  It must work toward the realization of goals that are larger than personal ambition.

The downside of those with a Life Path number 22 would stem from the Challenges for someone with this number in being overwhelmed by their own potential, and fear of failure, and although they can be determined, they may at times seem dictatorial, insensitive, and overbearing.

It can take someone with this number well into their adulthood before they manifest their dreams because they have to go through trials, and learning experiences before they mature enough to incorporate their true calling in their life.

The 22 serves the world in a practical way. 22 carries psychic gifts such as heightened sensitivity, intuition and psychic awareness, but is also predisposed to pitfalls such as treachery from hidden enemies.  All in all, 22 represents practical idealism and practical genius, a creator of the future, power on all levels, master of the material, philanthropy, universality, international direction, and service to mankind.

The 33 is the most influential of all numbers.  It is the Master Teacher.  The 33 combines the 11 and the 22 and brings their potential to another level.  When expressed to the fullest, the 33 lacks all personal ambition, and instead focuses its considerable abilities toward the spiritual uplifting of mankind.  What makes the 33 especially impressive, is the high level of sincere devotion.  This is shown in its determination to seek understanding and wisdom before preaching to others.  The 33 in full force is extremely rare.   33 is a higher octave of 6, the Flower of Life, Creation. In Freemasonry, the 33rd degree is the highest publicly known. The number 33 signifies “Illumination” and freedom from religious dogma and superstition.

A birth date that reduces down to 33 is very rare. When it does happen you may be looking at a great and significant spiritual leader along the lines of the Dalai Lama (Life Path 22) or Gandhi (Life Path 9). Remember that a 33 is also a 6 life path, a very nurturing and responsible number.

33 is the Master Teacher. This individual's focus is on reaching the world and uplifting the loving energy of mankind. They are not concerned with personal ambition, and have great devotion to cause.  Life Path number 33 is signified by the word altruistic. This number has a high energy and is concerned with doing good in the world.

Those with Life Path number 33 want to use their life to raise the consciousness of as many people as possible. Their concern is the earth and all the people who live here. It's really a beautiful life path number. As you may have guessed few have it. Below are some key points you might want to take into consideration to help you on your path …

The 33/6 life path will call you to leadership and responsibility. This may not always please you, but you'll have to make your peace with it.

The number 33 only matters when found among the core numbers: The Life Path, Heart's Desire, Expression, Personality, Maturity number, or as an Essence cycle or Pinnacle cycle.  In all other cases the 33 should be reduced to a 6.

3 means overcoming duality; it is linked to expression and creativity, manifestation and synthesis. It represents wholeness since it has a beginning, middle and an end. And it is the threefold manifestation of a unity, the holy trinity found in religions, philosophical teachings and myths all around the world.

In the English version of GENESIS, GOD is mentioned 33 times. Jesus Christ is believed to have been 33 years old when He died. Many Christians consider the "perfect age" to be 33.

In the year 33 AD the Assyrian Church was founded by Thomas, Bortholemew and Thaddeus. Mircea Eliade establishes that there are 33 major religions in the world today. 33 is the total number of vertebrae of the spinal column of the Human body, in which pass 33 pairs of nervous groups. 33 is the number of Perfect graphs with 3 vertices.

The 33rd degree is the highest degree within the Ancient and Accepted Scottish Rite (Freemasonry). The Animal Kingdom is divided into 33 phyla. The Sun will rise at the exact same spot on the horizon every 33 years. 33 is the smallest integer that cannot be expressed as a sum of different triangular numbers.

Another way to look at the Master numbers:

The Master numbers 11, 22, and 33 represent a triangle.  A triangle of Enlightenment. 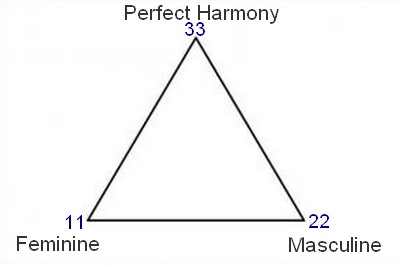 The number 11 represents the vision

The number 22 combines vision with action

The number 33 offers guidance to the world

When decoding your own name, it’s important to realize that […]

Numerology is based on the ancient idea that each of […]