The incredible calendar that you humans currently refer to as Mayan, was not
developed nor originally written by the society of Mayans in the manner that you
currently attribute. Indeed it predated the Mayans by more than 18,000 years. It
was originally developed by the enlightened Atlanteans of Poseida with assistance
from the Sirian-Pleiadean Alliance, and stored in crystalline technology, termed
the Crystal Skulls... " Archangel Metatron

The legend is that there are 13 crystal skulls that had been in the possession of the ancient Maya. Over time, the skulls have been strewn throughout the world. According to legend, when they are reunited they hold the power to save the Earth. Several of the skulls have been found. One is in London, and one is in Paris. Descendants of the Maya are believed to have one that is hidden away in a mountain, and one skull is known as the Mitchell-Hedges skull and is in the Canadian home of the woman who discovered it.

Famed British explorer, Frederick Mitchell-Hedges was excavating the ruins of a Mayan city named Lubaantun on what is now Belize starting in 1924. His daughter discovered a crystal skull in a pyramid on her 17th birthday in 1927. That is probably the most famous of the skulls.

The skulls are fashioned from blocks of clear or milky quartz crystal rock. They are claimed to be pre-Columbian Mesoamerican artifacts. Unfortunately, it’s impossible to date them because the quartz crystal doesn’t decay or change with time. Modern testing has shown that they were probably not made with modern tools because the nature of the crystal would have cracked with the vibrations of the tools used to shape it today. Amazingly, the skulls are made from one solid block, a feat that would have been monumental for an ancient culture to accomplish.

The legend maintains that the ancient skulls carry mystical powers and were formed with thought rather than tools. For instance, when an old wise man became too old to perform his duties and younger man was chosen. The two would go to the sacrificial table in the Mayan city and a priest would perform a ceremony that caused the knowledge of the older man to be transferred to the younger man though the crystal skulls. When the transfer of knowledge was complete, the older man would die peacefully. Interestingly, the material used to make the skulls is the same material used to create the silicone memory chips for computers.

An old American Indian legend tells of the 13 crystal skulls, human skull size, which contains information about the origins and destiny of humanity.

According to legend, the crystal skulls were brought from space by 13 representatives of different alien races, they have committed various peoples. When the time comes, skulls will be rediscovered, predicts the same legend.  The 12 skulls must be placed in a circle, and the 13th century in their midst.

However according to the skulls themselves they are women from Atlantis who knowingly embodied the current wisdom of the day into themselves and allowed a process to take place where by their skull was turned to crystal and all the knowledge they contained remain inside.

Tests on the Mitchell-Hedges skull were able to determine that indeed the Mitchell-Hedges skull and it's jaw were carved from a single piece of quartz rock. Not only does the jaw separate but the dentation on all the molars and all the teeth are just absolutely great. As a piece of art. It's fantastic. If we used conventional techniques that exist today, with high-speed diamond tooling, and to polish it all out as the Mitchell-Hedges skull was polished. It would take the better part of a year, at least, I would guess. If they were using traditional methods, they would have to have used something of the order of heat, sand and water. All I can say is, it looks like as if there's about 3 different styles of workmanship, that went in on the crystal skull. If it was a single person, the useful life of a person in those days probably was no more than 20 years, so we're probably talking of 60 to 70 years. The Hewlett-Packard team found no evidence of any modern tool marks. They couldn't state categorically when the crystal skull had been made. This was to be the last time Anna Mitchell would allow scientific tests, but she allowed investigations of a different nature.

What I find amusing about the results from Hewlett-Packard is that they assume whoever created the skulls had less technology than us.  When clearly this is not the case.  If we still could do create such workmanship in crystal without leaving marks or shattering the crystal the obviously whoever did do it had a higher knowledge and greater technology than us.

Carol Wilson is apparently in a state of deep trance, what she is doing is called channeling, communicating with the spirits of the skull. 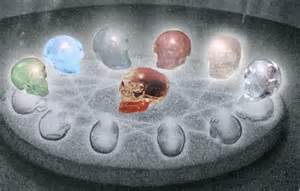 Carol Wilson is no ordinary psychic, the Toronto Police Department enlisted her services in a famous unsolved murder case. Her descriptions of the crime scene and the murderers were so vivid that the killers were caught and convicted. She also went on to marry the Detective in charge of the investigation.

Messages Carol Wilson received through this spirit are consistent with Anna Mitchell-Hedge's belief that the skull is over 100,000 years old. But some psychics have received other messages, one believes that the spirit in the skull is a woman called Jenchin. Prof Paula Gunn-Allen University of California says of Carol Whites channeling... "She told me how she came into being and she told me some things about where they came from - they've been several - I call them people, I think they're not humans like we are, they're a different kind of humans. They lived for a very long time, hundreds of years, and they came from somewhere that had collapsed, perhaps Atlantis, and there was a number of them, maybe 12, maybe 24, they left their remains in a cavern under the mountain spirit. In the bones of the corpses that they left behind, contained every iota of cosmic knowledge, spread throughout the entire universe, not our galaxy alone but many, and through many time frames, including the one that we're presently occupying."

Dr Ian Freestone British Museum Research Laboratory The British Museum skull is one of the most clear and attractive of the crystal skulls. It came into the museum in about 1898. It was bought from Tiffany's in New York by Augustus vonlangston Franks. It's reputed to have come to New York from Mexico, it was suppose to have been brought by a soldier of fortune, but that's just a story. We have no evidence of that. The skull has been here since the last century and it's always assumed to be Aztec.

Dr Jane Walsh Smithsonian Institution The skull was originally offered to the Smithsonian in 1884, 1885. There's an earlier auction catalogue that I found where he offered the skull in France, for I think, 3000 francs - but it didn't sell. And at that time it wasn't described as being Mexican or pre-Colombian, it was simply rock crystal skull. So I spoke to a number of people in our mineralogy department about where something like this could have been made or where they carved crystal and two people told me, almost at the same time - Edor Olvastein, which is a small town in Eastern Germany.